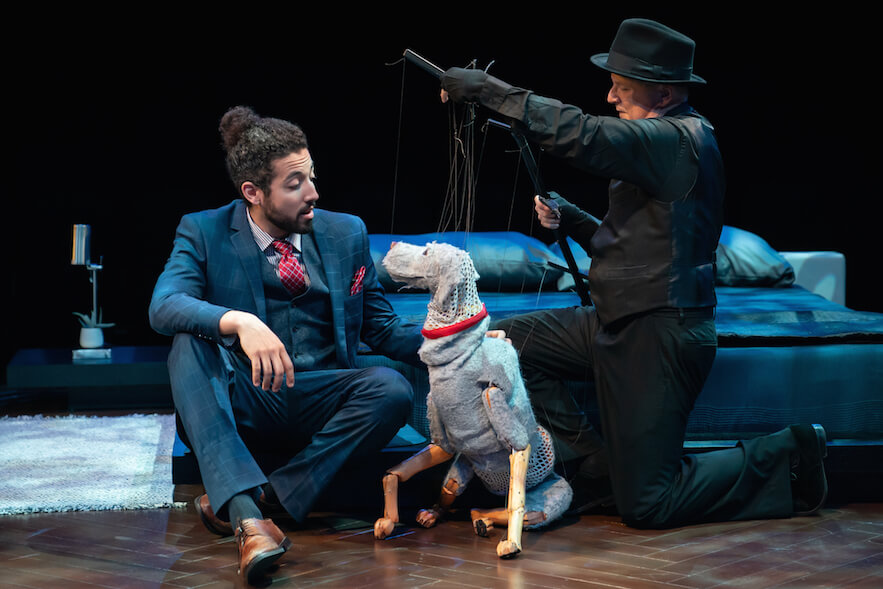 Harry is a talented, charismatic song writer who shares his Manhattan apartment with Paul, a Labrador Retriever that he rescued from a shelter. Harry’s made a fortune writing a simple jingle for a chain of burger restaurants, and he’s still doodling around composing other songs. But for months Harry’s creativity has stalled, suffering from the musical equivalent of writer’s block. Then one day, following her matinee performance, he meets Louise outside the stage door. She’s a talented youthful musical actress who stands out in the ensemble of her show. But, like Harry, Louise has bigger aspirations. The two hit it off from the start, partially because Harry’s dog is also taken with her.

One evening, Harry takes Louise to his favorite piano bar, which is owned by his brother who, coincidentally, is also named Paul. The bar crowd persuades Harry to play and sing one of his own compositions, which gives Louise a reason to witness her boyfriend’s musical talents. But she also observes that Harry is never more than an arm’s length away from his next drink, and that this gifted musician has a dependency problem.

Theatergoers should be warned: while this musical begins as a rosy-colored, optimistic love story, fueled by romantic dreams and whimsical comedy, it suddenly plunges, almost unexpectedly, into areas of profound sadness. Daniel Zaitchik’s original, new, seven-character musical journeys from happy fantasy to dark drama, and then back again. It’s a play that, while filled with some lovely songs and warm humor, is also layered with unpredictable sorrow. Act II includes one particularly painful, shockingly sorrowful moment, from which the play never fully rebounds. Only in the musical’s final moment is there a modicum of joy and redemption. More cannot be said without spoiling the ride on this emotional roller coaster.

Faithful patrons of the Marriott come to this theatre to enjoy professional revivals of old favorites, such as their next production of “Oliver,” as well as recent Broadway hits, like the upcoming “Something Rotten.” But the Lincolnshire arena stage has also developed over a dozen original shows, as part of the National Alliance for Musical Theatre. Daniel Zaitchik, who wrote both the book and score for this deeply affecting musical, first presented his new play in a staged reading in Los Angeles. It later became a work in progress at the Goodspeed’s Johnny Mercer Writers Colony. This production at the Marriott is being billed as its Midwest Premiere and possibly its pre-Broadway debut.

Directed and choreographed with polished artistry and deep sensitivity by Lead Artistic Director Aaron Thielen, this brand new musical is brought to life in an intimate, arena production that Chicagoland audiences will enjoy. The bittersweet journey that theatergoers take with Harry, Louise and Paul will inspire laughter, delve into some sensitive areas of truth and reality and even provoke a few tears. It’s probably advisable to bring some tissues to theatre for this show.

The cast is superb. Seen last year in the star-making title role of “Jesus Christ Superstar,” at the Chicago Lyric Opera, Heath Saunders makes his first appearance on the Marriott stage, playing Harry. Also appearing on Broadway in the critically acclaimed “Natasha, Pierre, and the Great Comet of 1812,” Saunders is terrific as this likable, yet troubled, young composer. It’s a musical that almost feels tailor-made for him. Since this is Harry’s story, Zaitchik keeps Mr. Saunders onstage for practically the entire show; but this actor is up to the challenge. He has the voice, the charm and the requisite stamina to carry this play, from his energetic opening number, “Swell,” sung with the rest of the talented cast, to the show’s enthusiastic final number, simply entitled “Epilogue.”

Katherine Thomas thrilled and broke the hearts of Marriott audiences as Sarah, in last year’s production of “Ragtime.” As Louise, this gifted actress/singer brings a sincere, sympathetic portrayal of a young musical actress who, like the guy she’s fallen for, isn’t sure if she’s on the right career track. She dazzles with songs like “Suspended,” “Paradise”and the catchy, ensemble-led tune, “Party Hat.”

Returning to the Marriott after appearing in “Footloose,” “Oklahoma” and “The Bridges of Madison County,” Nick Cosgrove is magnificent as Harry’s bartending brother, Paul. Gifted with one of the most sublime voices to be heard on any stage, Mr. Cosgrove has appeared in several Drury Lane productions, including “Saturday Night Fever” and “Beauty and the Beast.” No flash in the pan, Nick also starred on Broadway as Frankie Valli in “Jersey Boys,” as well as in the 1st National Tour. He’s one of the best reasons for seeing this new show.

But the real star of this production is the other Paul, the lovable Labrador Retriever, created by the Huber Marionettes and brought to life by Phillip Huber. Within seconds, theatergoers will forget that Mr. Huber, dressed all in black, is onstage pulling the strings of this life-like puppet. For all intents and purposes, Paul, the dog, is a real-life pup; and his appearance at the curtain call confirms the power of his realistic, heartwarming performance.

Beautiful, multitalented Allison Sill and handsome, brilliantly gifted Brandon Springman portray the Woman and the Man. Together they play a variety of roles with ease; they also bring a full, distinct richness to the harmonics and melodies of Daniel Zaitchik’s score. In addition, accomplished instrumentalist Mike Nappi provides a jazz trumpet accompaniment from the aisles, in particular supplying the expressive voice of Paul, the dog.

Harry, a talented, young composer who, for years, has been using alcohol to hide from his inner demons, is finally forced to face reality in this beautiful new musical. Daniel Zaitchik has created an alluring story that begins in a romantically ideal universe and ends in the bitter world of reality and hope. Audiences can expect the Marriott’s typical highly-polished professionalism from this show. Jeffrey D. Kmiec’s glossy scenic design, enhanced by Anthony Churchill’s high-tech media and Jesse Klug’s site-appropriate lighting, are all spot on. With Ryan T. Nelson’s expert musical direction, along with orchestral accompaniment by Patti Garwood and her six pit musicians, Aaron Thielen’s production is stellar. His talented, affable cast of actors offer honest portrayals of characters who must face their real life problems and challenges head-on—with just a splash of grenadine, of course, to make them easier to swallow.