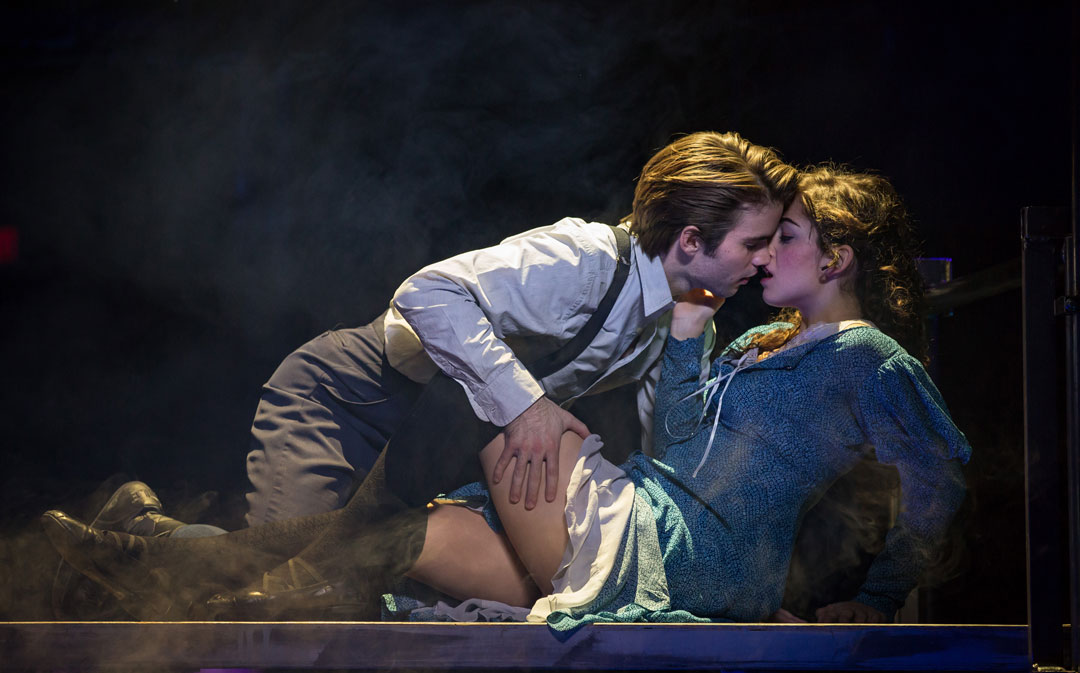 Ten years after it opened on Broadway to wild critical and popular acclaim (winning 8 Tony Awards, including Best Musical), Steven Sater and Duncan Sheik’s revolutionary exploration of teenage self-discovery and growing sexuality has finally made it to one of Chicagoland’s most respected professional theatres. This is one piece of theatre that should not be missed. Just as “Hair” revolutionized musical theatre in the late 1960’s and “Rent” left its indelible mark on the late 1990’s, this show will long be remembered as a work that helped redefine 21st century musical theatre.

However extraordinary, this may not be the show for everyone. Although it’s the perfect musical for teenage audiences speaking, as it does, directly to their interests, needs and concerns, the production contains mature themes, sexual situations, partial nudity and strong language. It’s a very daring departure for the Lincolnshire Theatre. Known for their family-friendly musicals and theatre for youth, lead Artistic Director Aaron Thielen has taken a big chance with this challenging, yet beautiful production, offering it as an add-on show to their regular season. It’s a limited, three-week run, and tickets are sold separately from season ticket packages (although subscribers do receive a discount).

In late 19th century Germany adults ruled their children with an iron hand while turning their backs on how teenagers coped with the puzzlement of puberty. Victorian society repressed their sexuality and, in particular, ignored the physical and emotional changes taking place within their kids. But questions about where babies come from, the strange changes occurring in their bodies and the unfamiliar feelings and desires surging through their minds continue to preoccupy adolescents even today. The characters in this musical simply explode, bursting with angst and yearning. Their songs are plaintive and mournful, or filled with fury and frustration, and danced with turbulent energy to a contemporary, folk-rock score that contrasts significantly with the turn-of-the-century book scenes.

Two talented veteran Chicago actors portray all of the adult characters in this production. Commanding and articulate, Hollis Resnik and Kevin Gudahl seamlessly transform from stern schoolmasters to the various children’s strict parents. Patrick Rooney turns in an accomplished performance as Melchior, the rebellious, freethinking young protagonist of this musical. His strong vocals and finely-tuned dramatic choices turn this teenager into a kind of adolescent Everyman. Mr. Rooney is particularly at his best in Act II, when he finds his world crumbling around him, especially in the poignant “Left Behind.” As Wendla, lovely Eliza Palasz sings with polish and heartfelt emotion. Her rendition of “Mama Who Bore Me,” as well as her duet with Melchior, “The Word of Your Body,” are especially stirring...

Ben Barker establishes himself as a true star in this production. As Moritz, Mr. Barker inhabits this troubled young man whose perplexing struggle with puberty is as confusing and frustrating as his attempt at academic achievement. Moritz’s slouched stockings and rumpled hair are visual metaphors for the muddled mess buried inside, especially while bitterly spewing forth “The Bitch of Living.” In Act II, despite all odds, the young man bravely but grievously proclaims, “I Don’t Do Sadness.” And later, in the show’s sad, final moments, Barker joins Mr. Rooney and Ms. Palasz in the affecting musical conclusion, “Those You’ve Known.”

Other standouts in this production include Brian Bohr as Hanschen, the handsome teenager who achieves sexual release behind closed doors; Nick Graffagna as Ernst, a young man who eventually comes to realize his secret crush with another student; Liam Quealy as Georg, a juvenile piano enthusiast whose enthusiasm includes sexual fantasies involving his instructor; Adhana Cemone Reid as Martha, a sweet, young girl who secretly endures untold physical and sexual abuse at the hands of her father, expressed musically as ”The Dark I Know Well;” and pretty Betsy Stewart as Ilse, an independent young woman who has run away from home and is living among the free spirits of a local artists’ colony, shared with Moritz in the lovely song, “Blue Wind.”

What really emerges in Marriott’s breakthrough production is a brilliant piece of theatre that speaks loudly and profoundly to modern, openminded audiences. The story may be from another era but, enhanced by a standout rock score, accompanied by a wonderful orchestra and sung by a talented, young cast, Frank Wedekind’s ideas emerge as fresh and contemporary. In fact, it is disturbing to realize that many of the same issues from 1891 Germany are just as relevant today: conversations about sexuality, masturbation, unwed pregnancy, suicide, physical and sexual abuse, abortion, homosexuality and religious doctrine are still taboo. Passionately performed, sensitively directed and boldly choreographed by Aaron Thielen and accompanied by Patti Garwood’s brilliant on-stage orchestra, this is a starkly beautiful, in-your-face production that will rock audiences to the core and haunts them long after the final bows.