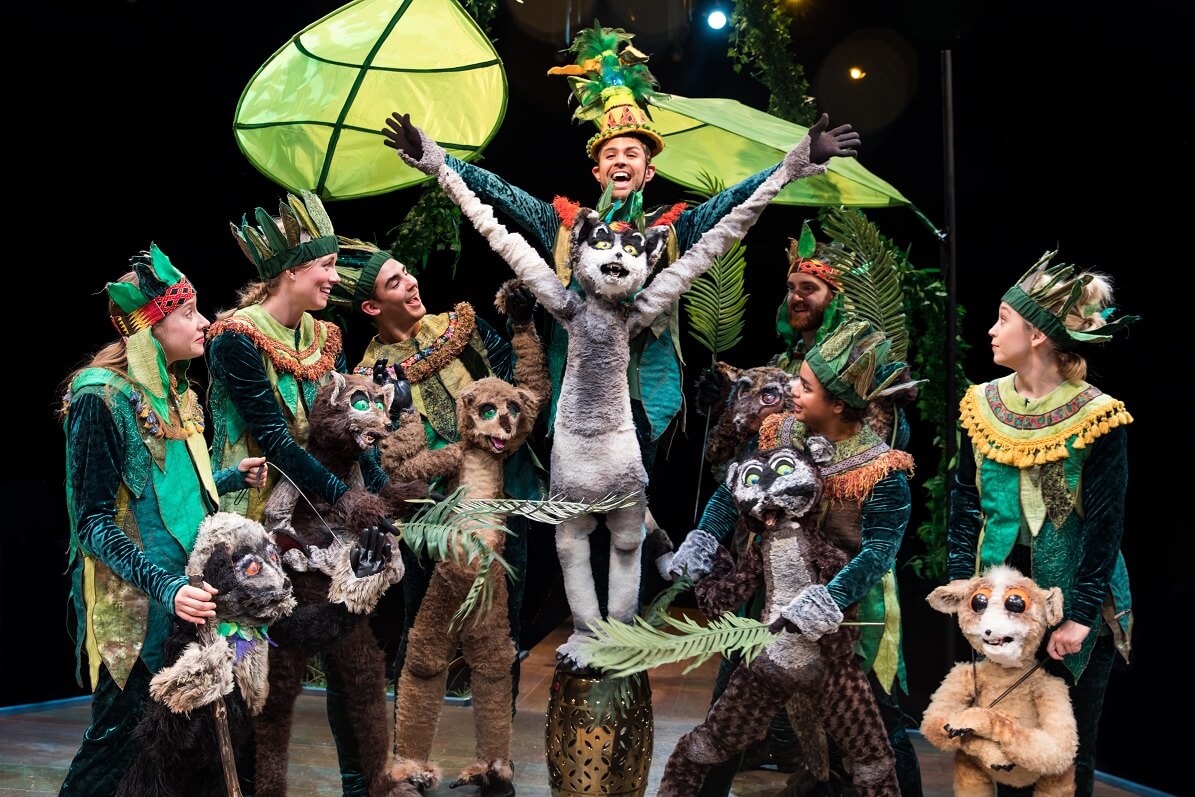 As always, when Marriott Theatre does their “family” productions, it is in order to give the family great entertainment, while also getting children to see the theatrical experience as a “positive”! For this, as I do often, I say to Marriott ( and all the other theaters who do this) Thank You! The kids who attend these productions are learning the value of live theater and at the same time, they are binding with their “adults”. As you all know, my grandkids are so involved with other “stuff” and they are now much older, so I turn to others to join me with their kids or grandkids in order to allow for a perspective of a “little one”. The current production at Marriott, “Madagascar- A Musical Adventure” was attended by the Schneider Family, Adam, Penny and their adorable son, Hamilton , along with his grandparents ( who spent more time watching him and his reactions than the show itself- I expected this to be just as it was!).


Hamilton loved the show. His favorite character, the giraffe ( that’s his class at school), so Melmen is the winner.. He loved how the penguins waddled ( and then he showed his parents, by waddling. He would not turn for a picture as he

seemed to me mesmerized by “the stage”. NOTE” at one time, his mother was an aspiring musical theater performer, so it brought a tear to her eye to see her son light up at the theater!

For those unfamiliar with the show ( I am not sure that this is even a possibility) it is based on the cartoon. Some of the animals in the New York Central Park Zoo feel it is time to go home. To escape!

We are witness to this and get to watch these animals embark on a truly unique and magical experience train. We must remember that all of these animals have spent their entire lives in captivity and now they are out and about in Manhattan, of all places, until they are captured and taken to Africa’s Madagascar, where they learn a great deal about freedom and its costs as well as love, friendship and caring. Sharpley directed by Johanna McKenzie Miller with very slick choreography by Erika Mac, this production takes us from animation cartoon to live action on an in-the-round stage. There is very little set as they are working on a stage that is also part of the main stage production “Something Rotten” (a stitch, by the way), but the other tech aspects of this production are near perfect.

The cast is made up of people that we are familiar with from Marriott’s main productions as well as other local area theater companies: Alex the lion is played to perfection by Liam Quealy, who many of us have seen grow up on the stage of Lincolnshire. His best friend, Marty, the zebra is delightfully played by Ron King. Gloria, the hippo is handled by Rashada Dawan and the comical character, Melman by the always hysterical Steven Strafford. Many of us know Yando Lopez for his ensemble work, but I must tell you that in his role as King Julien ( he does the “Move-It song) he is a stand out! They need to use him in more character roles!

The rest of the ensemble is made up of, Allison Sill (Skipper), Laura Savage (Private), Garrett Lutz (Mason), Alejandro Fonseca ( Kowalski), Emily Agy (Rico), and Landree Fleming as Maurice. The puppetry is adorable and in this production, the penguins are puppets. The earlier version of this show had them dressed in penguin suits and was clever, but after watching how strong these actors were with their characters and the puppets, I see why Miller opted to do it in her own way…and it worked!

The beauty of these productions is that they can keep the interest of the little ones and after the curtain call, the kids have an opportunity to see a little “behind the scenes” of what they do and how it all happens. A great education for the kids (and it doesn’t hurt the parents to listen as well).