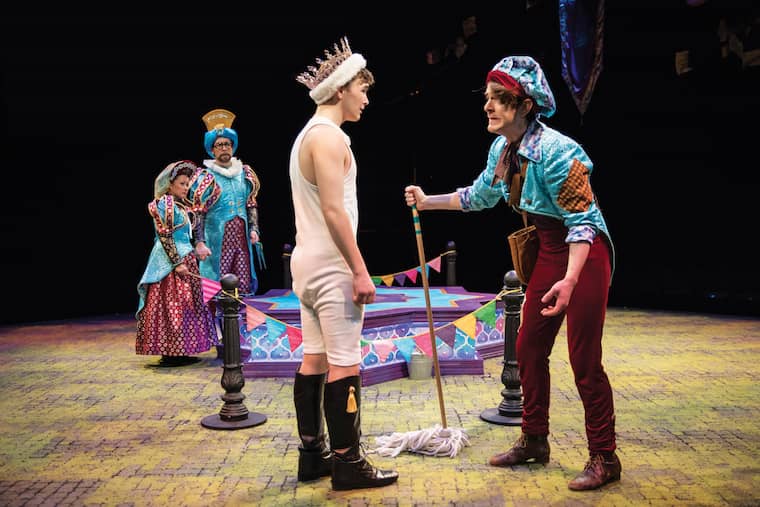 When it comes to children’s theater and the reviews of these plays, I have always made it a point to be as open and honest with my readers as possible. Exposing children to “live theater” is for me a stepping stone in their lives of loving live theater, so , I have been bringing my grandkids over the years, in order for my readers to hear and see how a youngster truly feels about the production! To me, this makes sense, as it allows the adults to make an investment into the future of their child or grandchild. As my grandkids are getting older and have much busier social lives, there are often times they cannot fit the plays into their oft busy schedules ( sports, activities, birthdays, for Sarah, acting), so I have gone to finding other children to be the spokesperson and having their parents get somewhat involved in writing the review.

Marriott Lincolnshire, home of the Marriott Theatre and the company that produces the productions for Young Audience, over the years, has thrilled the youngsters in my life with witty new musicals. Some of these are original musicals written for the Marriott stage. One of the men that I bowl with has two lovely daughters who I recently purchased Girl Scout Cookies from, and so I asked them if they would like to help me out by watching the new show at Marriott, “The Emperor’s New Clothes”, based on one of the famous Hans Christian Andersen’s story of the same name.

In this version, a different score and lyrics are utilized in telling the tale and as they are known for, the entire production takes just about 60 minutes (the perfect amount of time for the little ones, just getting acclimated to Live Theater).

“The Emperors New Clothes” is a lively play filled with silliness and laughter for all ages. King Marcus (Declan Desmond ) is searching for new clothes to help him find his ruling “style”. We enjoyed the interaction Marriott children’s theater offers. The question and answer at the end is always my favorite.

We are introduced to a young king Marcus who is to be crowned at the age of 14. From the start he has a hard time seeing himself as a ruler. King Marcus meets Arnott ( deftly handled by Garrett Lutz) a low ranking sweeper. The two are the same size and hit it off. The king is advised not to talk with someone of such a low rank. Although the king is book smart he feels he is not very kingly. The first court he holds is not successful. He fails to take action to resolve concerns of his people. The people feel he’s too preoccupied with the search for new clothes.

Hearing the rumors Swindler ( played to perfection by Johanna McKenzie Miller) takes advantage of the kings concerns and offers to make him a magic suit that will help him rule. Liars and fools would not be able to see the suit. During the week Swindler claims to be making the king his magic suit, she enjoys making demands of the servants as the King has ordered she should be given “anything she wants”.

A grand parade is planned for the king to show off his magic suit. When he is presented with the suit ,everyone in his service pretends to see the clothes, even him.

The only person who would tell him the king he was in his underwear is Arnott, the sweeper, and us in the crowd. In the end the young king finds his ruling “style” even without clothes.

Other cast members are: Christine Bunuan as Deena and Chicago favorite George Keating as William. Both of these actors are powerful and able to make even a small role, important.

Editor’s Notes:
On the technical side , the sets and props by Chrisopher Rhoton work very well in utilizing the set of the current “adult” show, “Ragtime” and the costumes [by Jesus Perez] as always are bright and cheerful (except the new suit the Emperor wears. Hah, Hah!). Robert E. Gilmartin’s sound and the lighting by Lee Fiskness is bright and cheery.