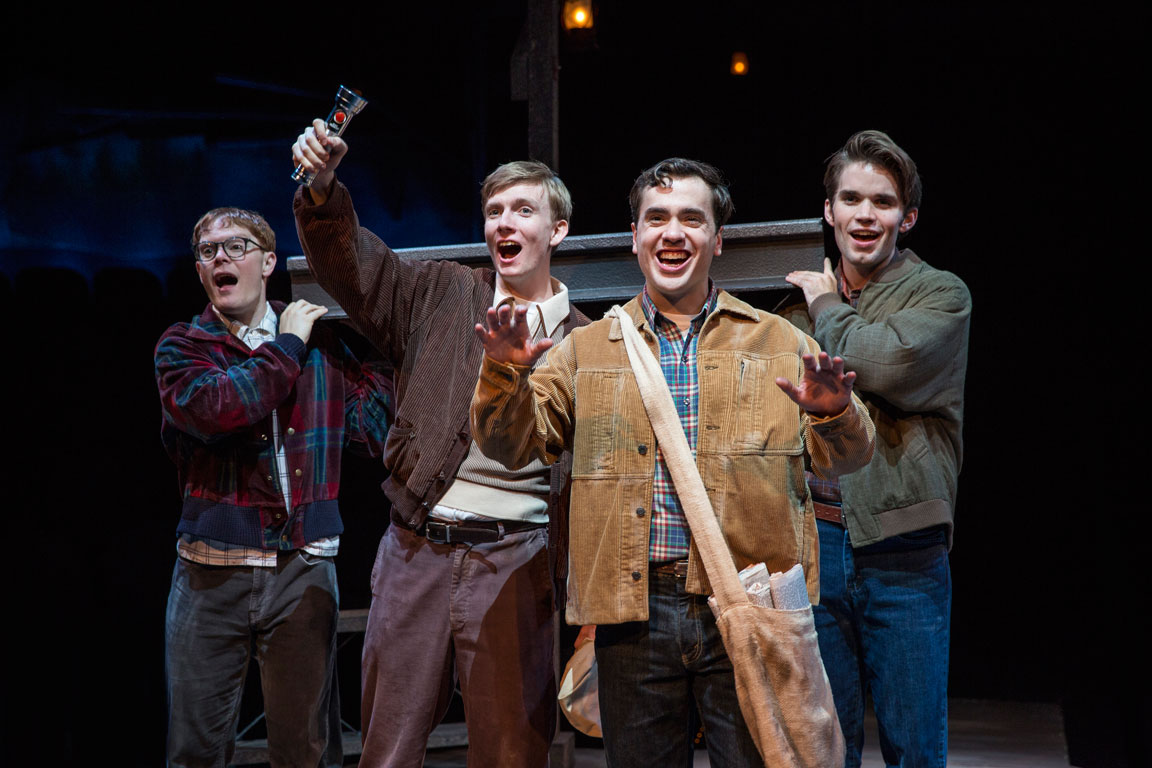 by
Hedy Weiss
at
Chicago Sun-Times

“October Sky,” the world premiere musical that rocketed straight into the hearts of Wednesday’s opening night audience at the Marriott Theatre, tells a story that is familiar in many ways. Like Elton John’s “Billy Elliot” and Sting’s “The Last Ship,” it has a particularly powerful link to the tensions between fathers and sons in blue collar families – men and boys who crave each other’s love and approval, even as one sees his life’s work turning to rust, and the other is forced to break free if he is to have any life at all.

The show, with its fervent score by the immensely talented Michael Mahler (whose lyrics are as varied and vivid as his music), a rock solid book by Aaron Thielen, and beautiful ensemble work by a cast under the relentlessly honest direction of Rachel Rockwell, is a gem. But let’s get the inevitable question about “Will it go to Broadway?” out of the way right from the start. This is not a work of glitz and salesmanship; it is an exquisitely honest, poetic work that ideally should be seen in the very broken towns and cities where it would mean the most – from the Appalachian coal-mining region where it is set, and on even to rural China, which has experienced such grand-scale changes in recent decades. And that is meant as the ultimate compliment.

Based on the 1999 movie of the same name (and the book, “Rocket Boys,” whose author, Homer H. Hickam, Jr. – a coal miner’s son who became a NASA engineer, is its central character), “October Sky” is deeply rooted in a crucial moment in American history. The year is 1957, at the height of the Cold War, when the Soviet Union launched its Sputnik rocket – an achievement that became a stunning wake-up call for this country, and the catalyst for a new focus on science education.

When we first meet him, Homer Hickam (played with heart-wrenching realism and vulnerability by the clarion-voiced Nate Lewellyn), is a smart but under-achieving dreamer. A high school kid who isn’t part of the revered jock culture of his older brother, he has a couple of friends – Roy Lee (Patrick Rooney), the handsome kid abused by his step-dad, and O’Dell (Ben Barker), the scrawny boy with a limp. But he is very clear in his own mind that he does not want to follow his father, John (David Hess), a proud miner who now works in management, down into the hellish mines of Coalwood, W. Virginia, which are beleaguered by layoffs, labor unrest and accidents.

Inspired by Sputnik, Homer enlists his pals, as well as Quentin (Alex Weisman), the long-bullied “brain” of the school, to become part of The Big Creek Missile Agency. And together, against all the odds – and confronted by the laughter and annoyance of their neighbors – they build a model rocket that actually takes off, eventually wins a national prize and, more crucially, assures that they will move on to college rather than down a mine shaft.
It is the different forms of encouragement supplied by two women whose own dreams never fully materialized that keep Homer going: His mother, Elsie (Susan Moniz), and Miss Riley (Johanna McKenzie Miller), his English teacher, and a secret poet. Moniz and Miller are exceptional singers, but it is their acting that steals the thunder. “I Don’t Know Him,” Moniz’ ferocious duet with her her husband (and Hess is excellent), is barely one step away from opera. McKenzie’s exquisite scene/song with Homer, “Something That’s Divine,” riffs on a Robert Frost poem, but finds it’s own soaring soul. And, as superbly delivered by Lewellyn, there is pure poetry in Homer’s anthemic “Stars Shine Down” – a fine counterpoint to the miners’ “Marching into Hell” song. (Only the science fair scene could use a bit of tweaking to heighten the boys’ sense of panic.)

There are fine supporting performances by Derek Hasenstab as the mine’s charming Polish welder, Ike Bykovski, and by Terry Hamilton as a union activist. For pure, irresistible joyfulness there is a scene in which the boys buy hooch to use as rocket fuel, and James Earl Jones II (as Bathtub Amos), joins with an onstage jug band for the rousing “Moonshine.” Under the musical direction of Ryan T. Nelson (with the orchestra, complete with mandolin, banjo and guitars, led by Patti Garwood), Mahler’s blend of musical styles is seamlessly rendered.

Thomas M. Ryan’s spare but evocative set is ideally lit by Jesse Klug. And as for those silvery rockets: All it takes is a puff of smoke and an explosive pop to make you a believer.