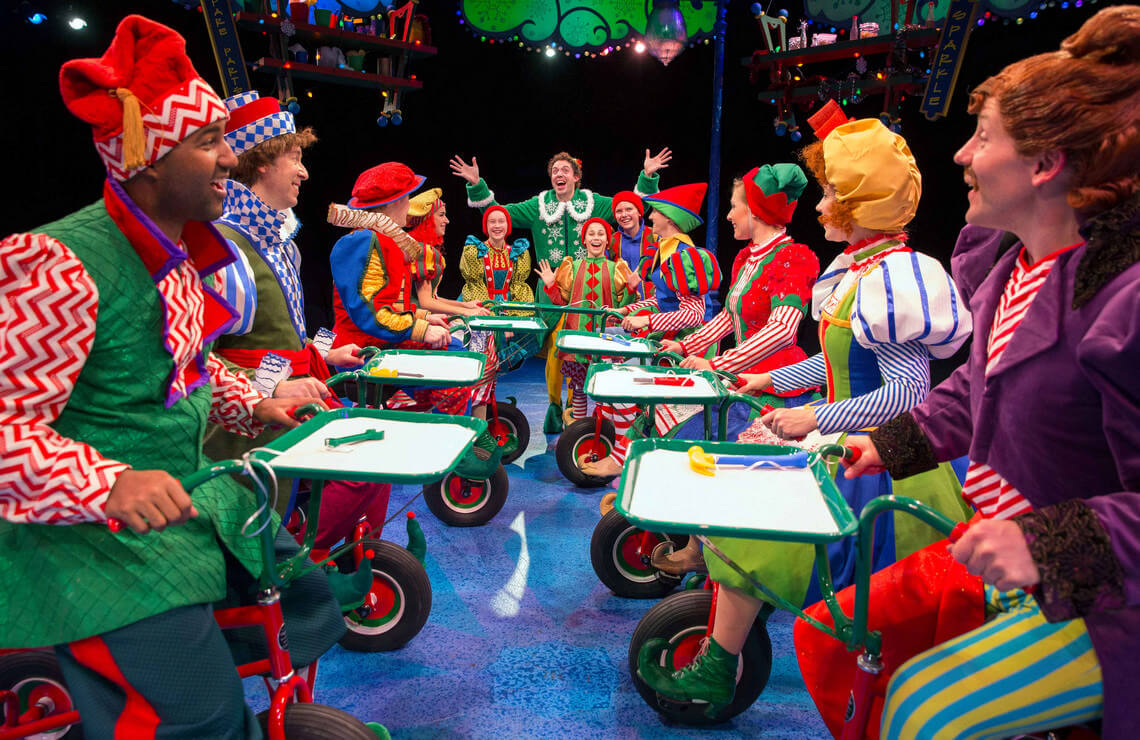 LINCOLNSHIRE – Marriott Theatre gave a jump-start to the yuletide season with its press opening Nov. 28 of “Elf,” a fluffy – albeit entertaining – musical comedy based on the popular 2003 movie of the same name.

Jeff Award-winner Alex Goodrich was well cast in the lead, a role originally staked out by Will Ferrell in the film. Marc Robin directs and choreographs this ebullient production.

Goodrich, tall and gangly, exudes charisma as Buddy, a young orphan who accidentally crawled into Santa’s (Roger Mueller) bag and found himself transported to the North Pole, where he was brought up by happy elves making toys in Santa’s workshop.

Now, at the age of 30, Buddy discovers he’s human. Wide-eyed and naive, he embarks, come what may, on a journey to New York City to reunite with the real father he never knew. Little does he know challenges that await in a city “naughty-listed” for giving up its belief in Santa Claus (or the giving spirit behind Christmas).

He arrives wearing his elf outfit – green robe, yellow tights, conical hat and curlicued slippers, and wanders into the North Pole holiday installation at Macy’s department store, where he inspires lackadaisical employees to find joy in their work, unmasks a booze-impaired fake Santa Claus and is smitten by Jovie (Dara Cameron), a comely staff member.

Buddy’s initial encounter with his stunned, incredulous and brusque father Walter Hobbs (the inimitable Kevin Gudahl) is frosty. And while his stepmother Emily Hobbs (Susie McMonagle) at first is cautious about this stranger, she warms to him after getting tangible proof that Buddy is telling the truth.

“Elf” may be lightweight but its core message about maintaining family ties is heartwarming and on point.