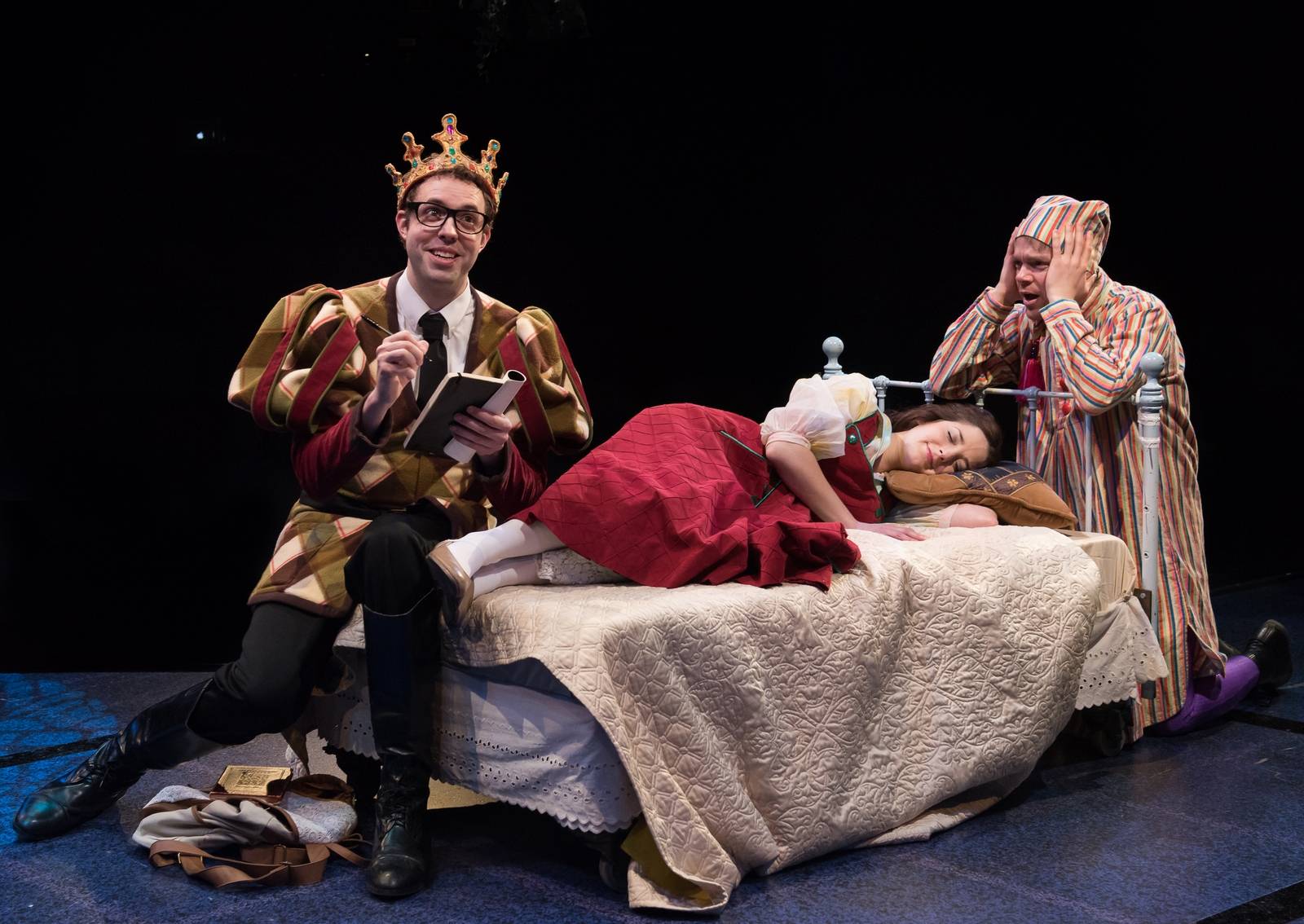 A Modern Twist on an Old Story

With a dash of brilliance and a generous peppering of modern-day references, Hans Christian Andersen’s classic children’s story about finding true love amidst challenging odds roars onto the stage in this wisely witty and waggish new production. With a book and lyrics by Rick Boynton and music by Marc Robin, it’s the ultramodern twists that bring this story into the 21st century and make it absolutely accessible for today’s young, media-conscious audiences.

When theatergoers enter, haughty Queen Evermean’s animated visage is seen projected overhead on several large screens. While striving to maintain her regal elegance, the queen’s busy swatting away annoying flies, grimacing at unseen bothersome subjects and grinning evilly, like a medieval version of Big Brother. It establishes this anachronistic kingdom where the omnipresent media rules in tandem with royalty. Continual news broadcasts, reality TV and quiz shows assault the senses as shy bachelor Prince Wellington, a would-be author, is about to be married off to the most eligible (or wealthiest) princess in the kingdom.

The obnoxious Princess Buffy is the babe to beat. With generous help from Queen Evermean, Buffy has unbelievably triumphed over thousands of other young girls in the three preliminary rounds. A real Valley Girl with a mountainous deficiency of intelligence and sense, Buffy has the contest practically sewn up.

Enter into the competition a plucky young commoner named Ruth, who’s lovely, kind and reads voraciously. Following a chance meeting with Prince Wellington in the forest, Ruth helps save his life and, naturally, becomes the young man’s chosen contender.

In the final contest, we find the familiar berth piled high with 20 downy mattresses, under which lies a tiny pea. Apparently a true princess is so sensitive that she can be bruised by a small vegetable, even when it’s buried beneath a mountain of bed linens. In the end, of course, everyone lives happily ever after, and every performance is followed by an informative and entertaining talkback with the audience.

Scott Weinstein makes his auspicious directorial Marriott debut with this production, and he’s staged this in-the-round production with spirit and style. As in most Lincolnshire shows, the actors run up and down the aisles, bringing them even closer to their young fans. Weinstein is ably assisted by Ryan T. Nelson’s musical direction and Patti Garwood’s accomplished musical supervision. The always innovative Nancy Missimi has designed a sparkling array of colorful and whimsical fairy tale-modern costumes that will delight every princess in the audience. And, with some added greenery, Tomas M. Ryan’s set for “La Cage aux Folles” is magically transformed into a fairy tale kingdom.

An enchanting company of Chicago favorites bring these playful characters to life. Beautiful Susan Moniz, a favorite at the Marriott, deliciously plays Queen Evermean with a balance of ego and evil. The result is a very funny, not-to-be-crossed villainess, sporting a look that melds Disney’s evil queen from “Snow White” with RuPaul’s Drag Race. Ms. Moniz absolutely rules over this show. Lovely Dara Cameron, currently appearing at Mercury Theater as Wednesday, in “The Addams Family,” is lovely as Ruth. Filling this fairy tale with beauty and selfless generosity, Ms. Cameron proves there’s power to be found in knowledge and kindness and that readers are all winners. The endless comic talent of Alex Goodrich is given full play here as Prince Wellington. He plays the role as a sweet, somewhat nerdy young man who desperately needs a companion who appreciates good writing, someone to be a yin to his yang. The funny and friendly Mr. Goodrich soon has the audience cheering for him to win Ruth for his bride. Talented Don Forston does double duty as an officious newscaster and as Ruth’s kindly Papa. Gifted Marriott newcomers Samantha Pauley and Derrick Trumbly complete the cast as the hilarious Princess Buffy, a vapid vision enveloped in yellow ruffles, and Chester, the Quiz Show’s genial master of ceremonies and Prince Wellington’s friend and confidant.

This thoroughly entertaining contemporary retelling of Anderson’s famous story about royalty, vegetables and true love plays out like an episode of “The Bachelor.” Produced with polish, and featuring energetic direction and exciting, endearing characters played by a cast of aristocratic actors, this is one entertaining production that shouldn't be missed.