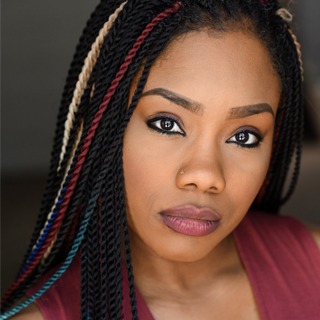 Chicago born singer, songwriter, musician and actress Angela Peel proudly cultivated her craft in the performing arts at Chicago's own Sherwood Conservatory of Music studying classical voice. She appeared as a Top 30 and Wild Card contestant on Fox Television's flagship season of American Idol and fromthere, went on to a principal role in a national spot for Coca Cola featuring her original song "No More".Angela is also an alum of The Lion King Broadway National Tour as Nala and has contributed her talents to several other stage works including Little Shop of Horrors, Sammy: A Musical, The Playground and others. Angela will be making her feature film debut in 2018 as "Dyshelle" in Imago - a film that focuses on contributing efforts to ending human trafficking. Angela would like to thank her "dream team" for their unwavering support and her two children for their inspiration.